The acl epidemic - don't be a victim

A leader in football fitness specializing in all aspects of fitness such as fat burn, nutrition, injury prevention, stamina, and speed.

One of the most feared injuries in football is an anterior cruciate ligament tear. In this article, I’ll outline what you can do to decrease your chances of suffering from this horrible injury and what to look out for in your movements which could mean you are at higher risk, don’t leave it down to chance...But first, let’s look at the anatomy of the ACL and its function within your body. THE ACL & IT'S FUNCTION

Anatomy: There are three bones that meet to form your knee joint: your thighbone (femur), shinbone (tibia), and kneecap (patella). Your kneecap sits in front of the joint and basically provides some protection.
There are four main ligaments (connect bone to bone) in your knee which work to keep it stable.

Research has shown that a change in the position of the shin bone relative to the thigh bone is the primary reason for an ACL injury, where the natural position is forced into an awkward, unnatural position resulting in a shear force being put through the ACL as it tries to stabilize the knee.

Many players also unknowingly suffer from knee “valgus collapse”. This is where the knee collapses inwards during movements such as landing or a squat. This again places increased force through the ACL and significantly increases the risk of ACL injury. Knee valgus commonly occurs in players where the hip internally rotates, which is often due to a lack of glute strength. Performing exercises such as the squat, paying extra attention to driving the knee’s outwards and activating the glutes throughout the movement, can be a really effective way of to prevent this horrific injury (if done correctly). You could even add in an elastic mini-band (positioned across the thighs) to ensure a greater level of glute activation and so that you have to actively work on keeping the knee’s driving outwards.

ACL injuries are particularly prevalent in football because of commonly occurring movements, which puts stress on the ACL. High-velocity changes of direction, pivots and rotation of lower limbs can affect the both function and stability of your ACL.

For example, if you were to pass the ball from one side of the field to the other using a “right-to-left” motion (kicking the ball across your body), you would be rotating whilst the left foot is fixed to the ground. That rotation would be happening at a velocity and force that is far greater than normal, which places the ACL of the left knee at a higher risk of injury.

Most ACL injuries in football occur without external contact to the knee joint. The non-contact nature of these injuries re-enforces that it is highly likely that these injuries are caused by abnormal movement patterns.

One study which analyzed the video recordings of players as they suffered an ACL injury revealed how most occurred during sidestepping or landing movements when the knee flexion angle was less than 30 degrees. 47% of these players had increased knee valgus!

Further video research has also shown that the majority of ACL injuries occur when the opposing team had the ball and the player is defending (73%). The most common activity which leads to an ACL injury was tackling (51%), followed by cutting (15%).

Typical advice for players wanting to return to play is an ACL reconstruction 4–8 weeks after the injury first occurred, when joint swelling has reduced. The aim of an ACL reconstruction is to give the footballer a mechanically stable knee and to reduce the risk of re-injury. Several studies have shown good knee function being attained after reconstruction.

Interestingly, some players are able to return to play without surgery. This is possible because of higher levels of strength and stability within and around the knee joint (pre-injury) thanks to additional conditioning work that the players had been performing. Even though this is possible, most players require surgery to fully recover.

Research shows that performing a thorough warm-up before training and matches will effectively reduce the risk of ACL injury and re-injury. Combining this with a weekly injury prevention programme which includes: balance training, plyometric training, neuromuscular training, flexibility, mobility, and strength training has also been shown to be highly effective in preventing ACL injuries.

It goes without saying that if you are unlucky enough to suffer from an ACL injury then you must work closely in person with a medical professional and injury rehab therapist to make sure you return to play in the safest way possible.

However, making sure that you do your injury prevention work and are educated in what most commonly leads to ACL injury is paramount and can really make or break your career.

It is more than worth a couple of hours every week to actively work to make your body is more resilient to injury. Not only are you decreasing the risk of suffering from a horrible injury like this (which will likely leave you on the sideline for at least 1 year) and giving yourself the chance to return without needing surgery if you do experience an ACL injury, but you will also be bullet proofing your body against many other common injuries while increasing your time on the pitch and building greater confidence in your athleticism.

Try and record yourself landing and squatting, or even watch some footage back of yourself playing. Can you spot knee valgus in any of your movements?

This article is from Matchfit Conditioning. Matchfit Conditioning is a fitness leader in football specializing in all aspects of fitness such as fat burn, nutrition, injury prevention, stamina, and speed. They have helped thousands of footballers across the world from amateur to pro become match fit.

They offer a truly amazing, extremely in-depth program to help you prevent injury. It contains priceless information and is risk risk-free 60-day money back guarantee. 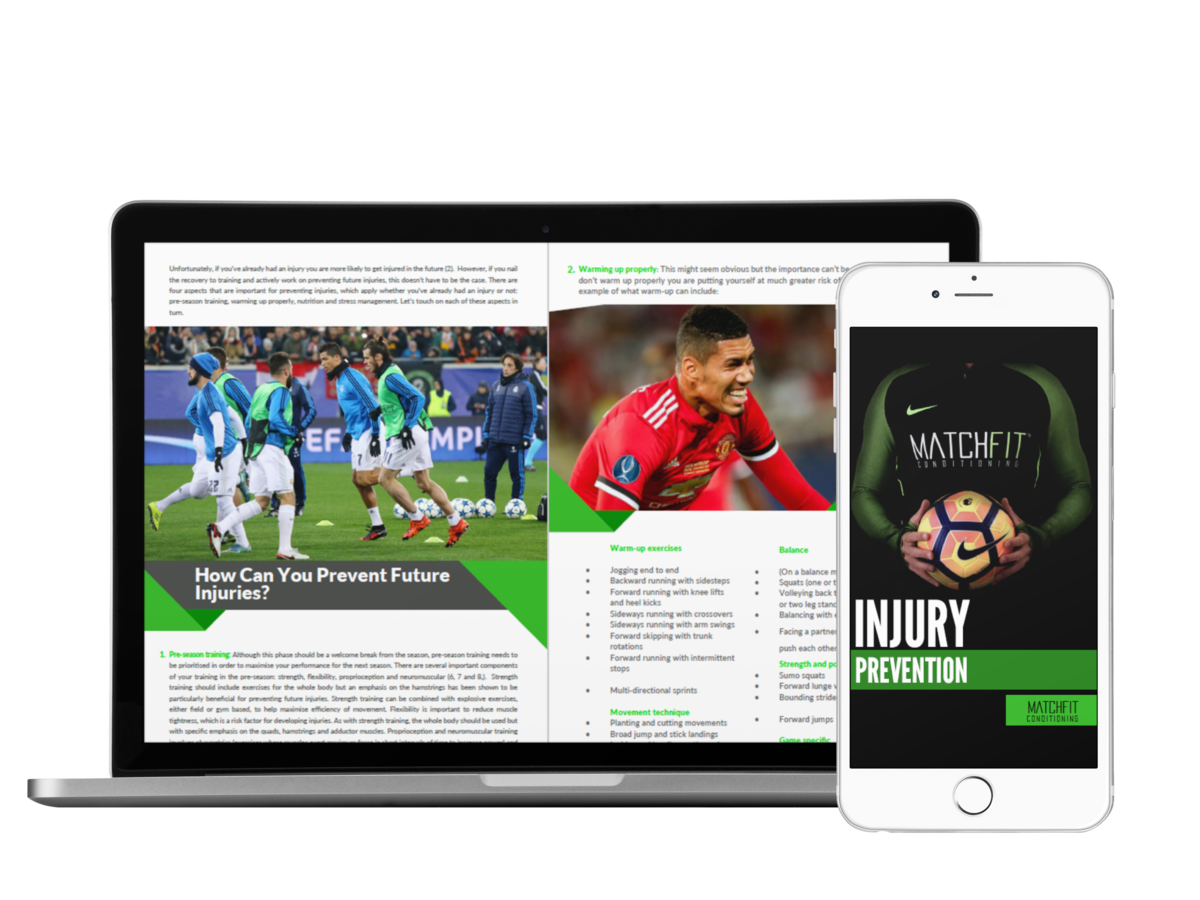 The Injury Prevention program is designed to be implemented throughout your entire season. With short, football specific workouts to use as part of your active recovery sessions and prime your body before training and matches.

Use code matchfittransform for 15% off!